Last weekend, I was able to try my hand at a brand new experience: a cooking class!

The Rolling Pin Kitchen Emporium in Brandon, Florida is not only a kitchen supply store, but it also hosts a plethora of cooking classes! There are so many to sign up for, but one class in particular stood out to me when I perused the calendar….the French macaron class! My mom and I promptly signed up for a spot. 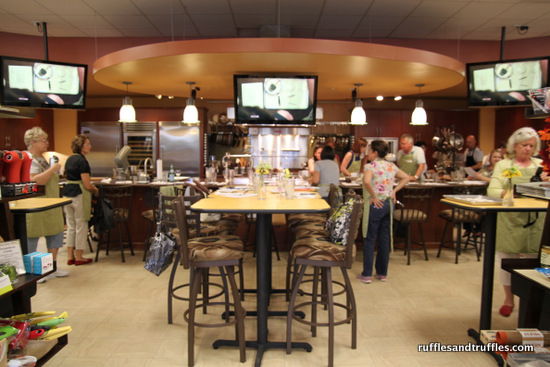 Upon stepping in to The Rolling Pin, I was definitely impressed by the setup! The demonstration/kitchen area was spacious, and the seating was plentiful for our group. If you weren’t able to snag a seat directly in front of the instructor, you didn’t miss any of the action – see the TV screens mounted in the ceiling? They were attached to cameras that focused on the cooking area as the instructor worked; you could see every detail! To start, we watched our instructor whip up a batch of the pretty French petit fours… 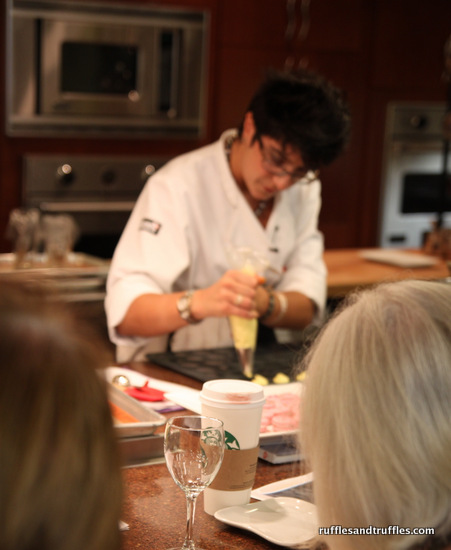 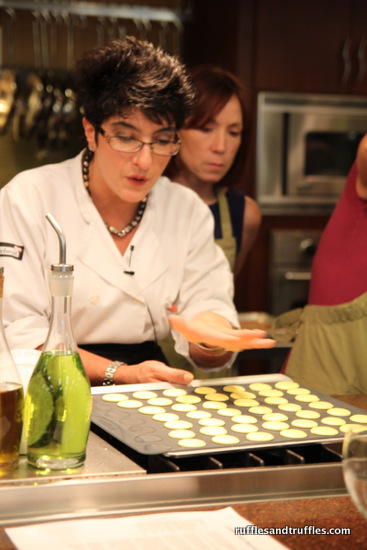 Since I’d never seen anyone make macarons before, I was all eyes and ears, taking copious notes so I can hopefully recreate the delicacies at home.

We also were able to try a few that the instructor had made in advance: I can’t say no to that! 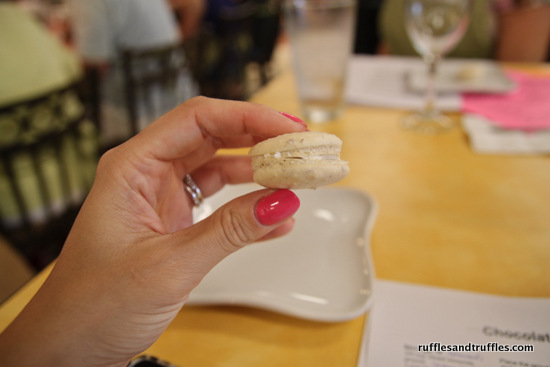 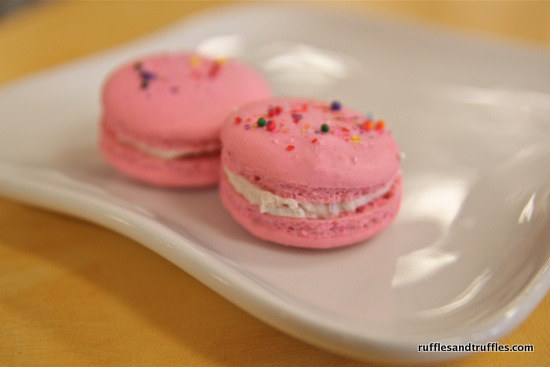 Once we had some instruction, it was time for the students to get in on the action! We split into groups and each group was in charge of a different flavor to prepare. 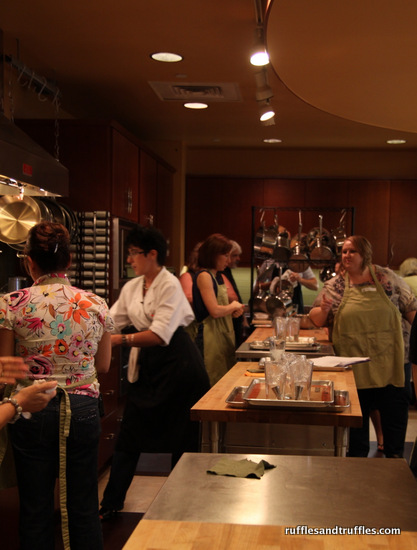 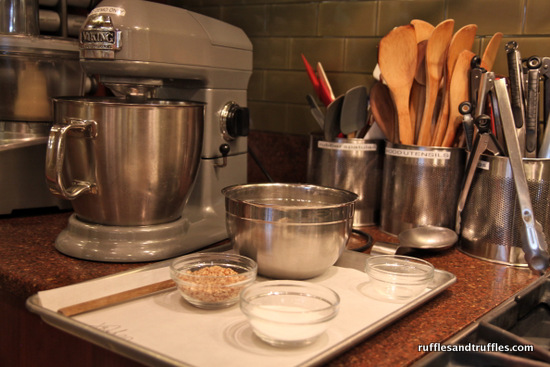 Our ingredients were already measured for us and were ready to go. First up was to whip the egg whites. Did you know that macarons require OLD egg whites??? Yep – you separate the egg whites and let them sit out for 24 hours before making macarons. I had no idea. I guess you really have to prepare in advance to make some of these treats! 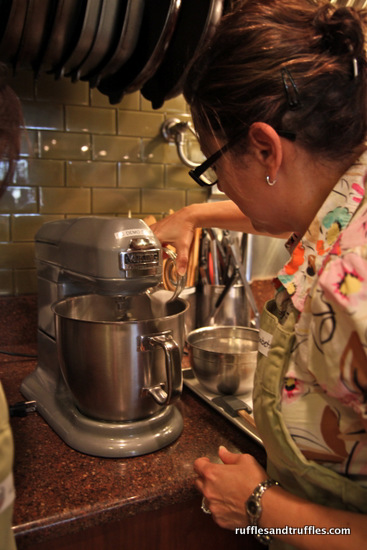 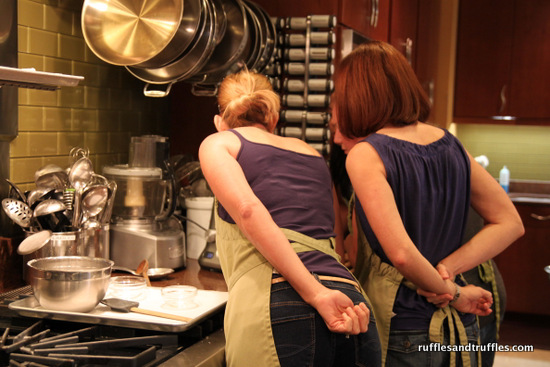 Mixing in the dry ingredients came next – make sure you don’t overmix it! 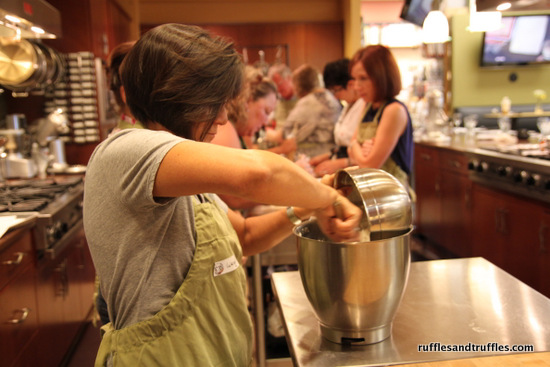 Piping the mixture was the next step…followed by slamming the tray on the counter (really hard!) to settle/spread the batter out. 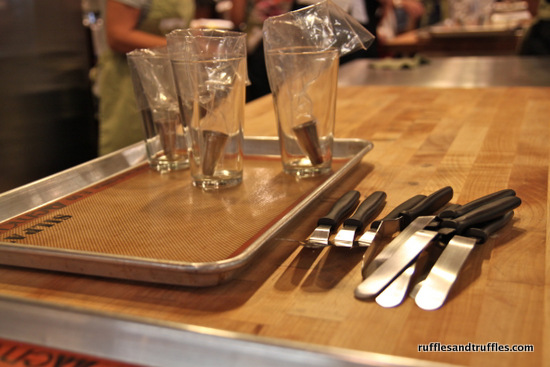 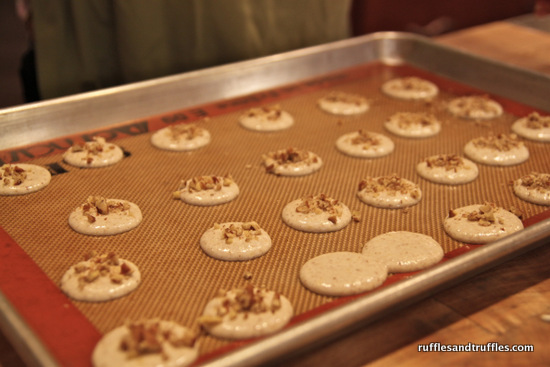 At that point, you leave the macaron batter out for about 30 minutes to allow a film to form on the outside of the cookies before baking. 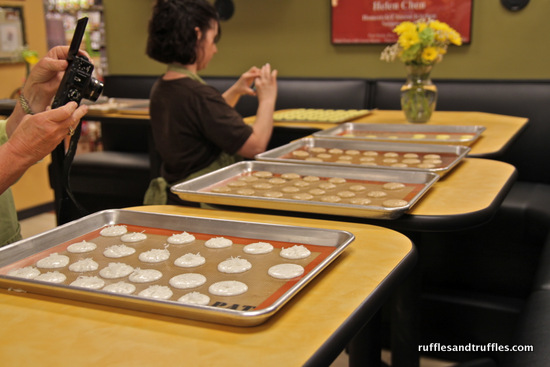 As we waited, it was time to prepare the various fillings. My group was in charge of cooking down some dulce de leche and chopping bananas to add to the toffee macarons. Yum! We also enjoyed a glass of wine at that time; can’t complain about that nice detail of the class! 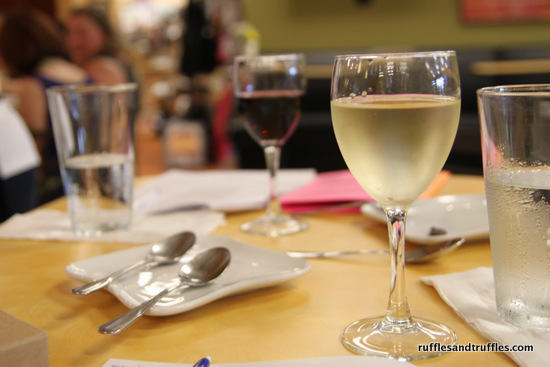 Once the cookies were baked and cooled, it was assembly time! 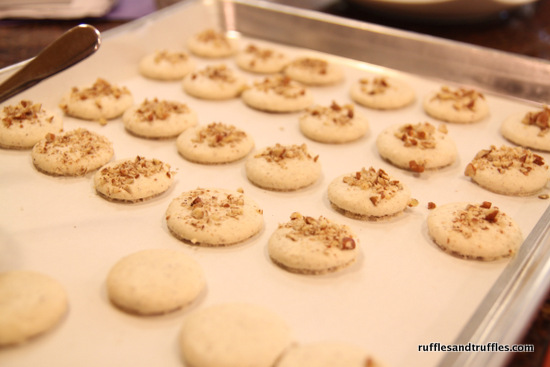 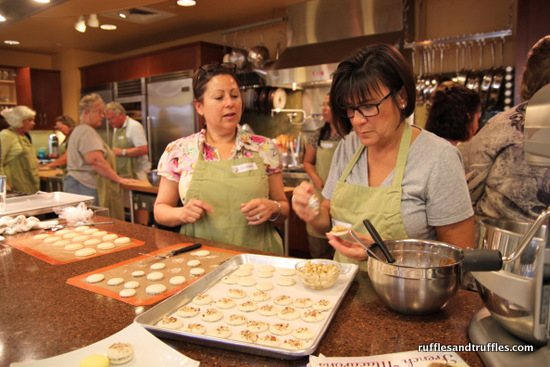 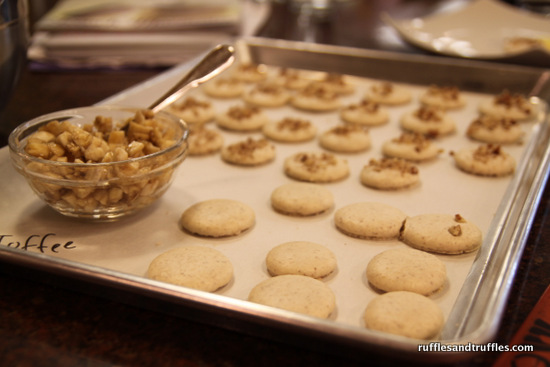 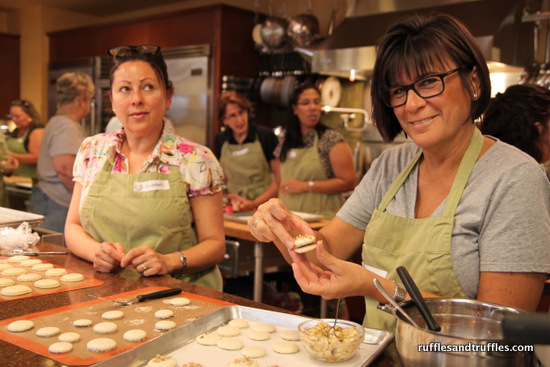 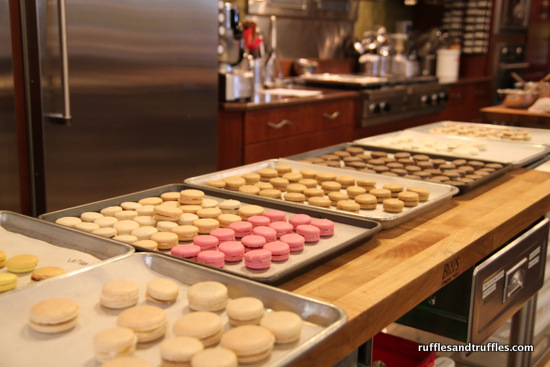 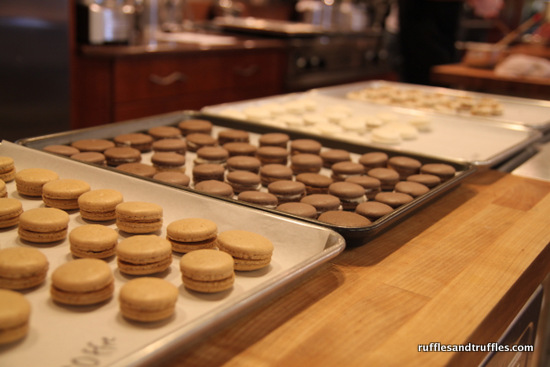 Each student was given a box, and we all filled ours up with a baker’s dozen of macarons to take home! Justin was happy about that… 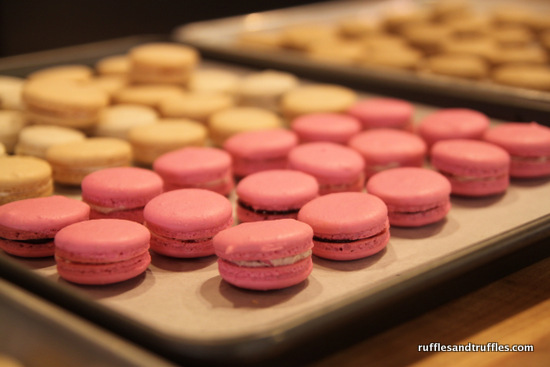 All in all, I was so glad to be able to take part in the macaron class. Macarons are a pastry I have been terrified to try my hand at in my home kitchen, but after this class I feel much more confident! Having an instructor to give tips and tricks and oversee a first batch was definitely helpful. I plan to share a recipe or two on the blog in the near future once I actually whip up some cookies in my own kitchen! There are quite a few flavors I have my eye on…

Have you taken a cooking class before? What did you learn? 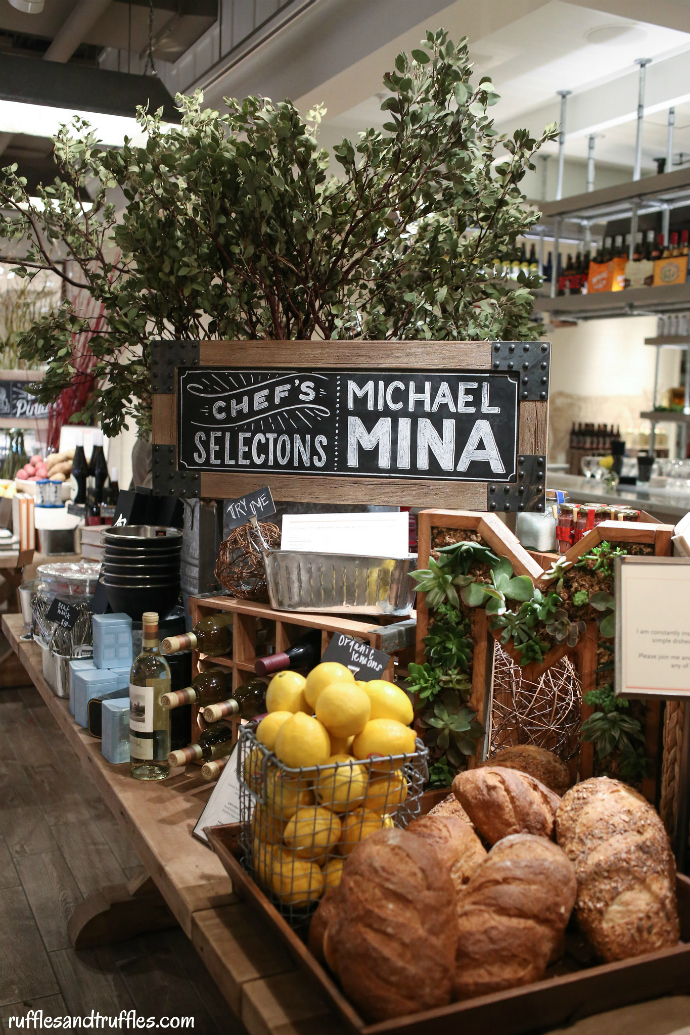 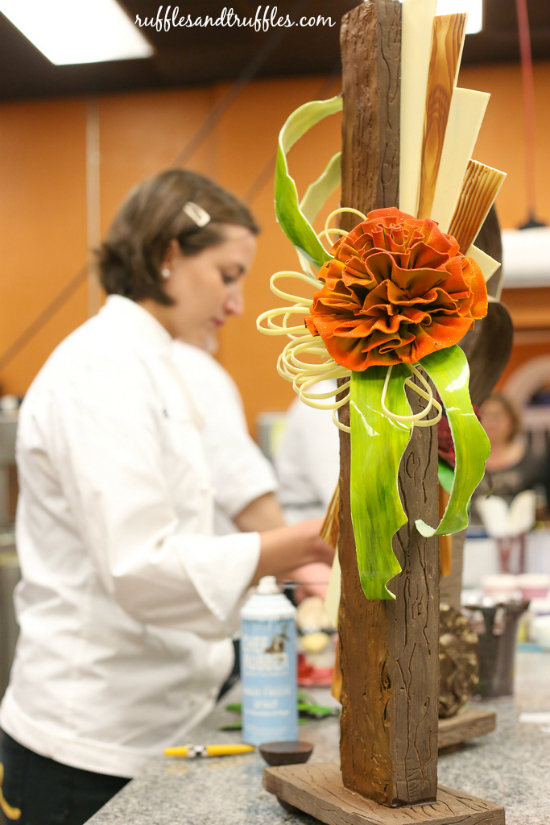 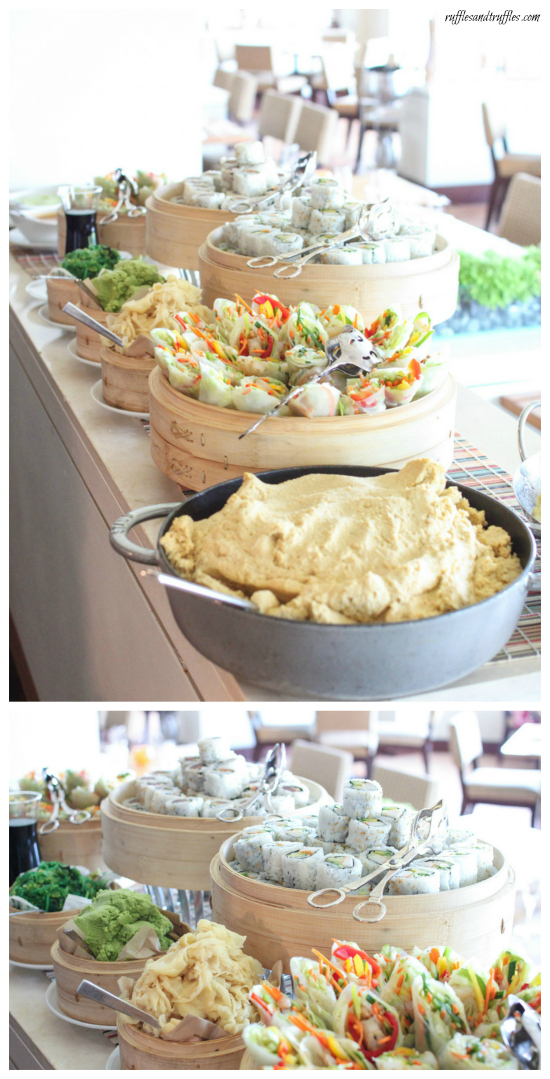