Happy Friday everyone! I am pretty much ready to kick off the weekend at this point. Especially when it involves spending time with this adorable little dude.

I mean: come on! His faces slay me, wrapped up like a little burrito in his bed! One funny thing about Sherman: he has an underbite. You can see a hint of it in the photo above, but it took me a few days to realize. It kind of cracks me up to see his silly grin when he pulls his lips back a bit. 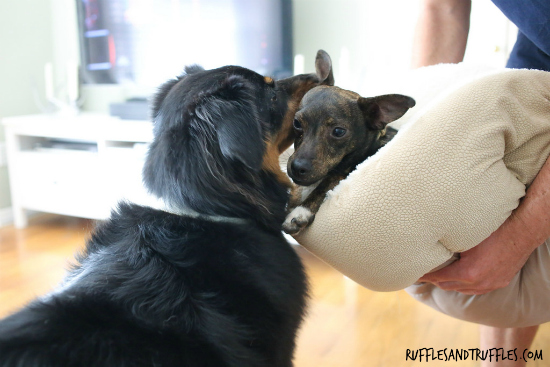 If you’re wondering how Lucia and Sherman have been getting along so far, I’m happy to report they have become very good buddies over the past two weeks. I have to admit that I was a bit nervous to see how she would react to him, but it seems as though they’ve become inseparable pals. Lucia is incredibly gentle with him; even though she is four times his size. They wrestle around on the floor, they play tug with their rope toy (Lucia doesn’t tug hard so Sherman has a bit of a shot at it), and they even seem to take turns chewing on toys. There has not been a single fight or skirmish or territory battle between them. 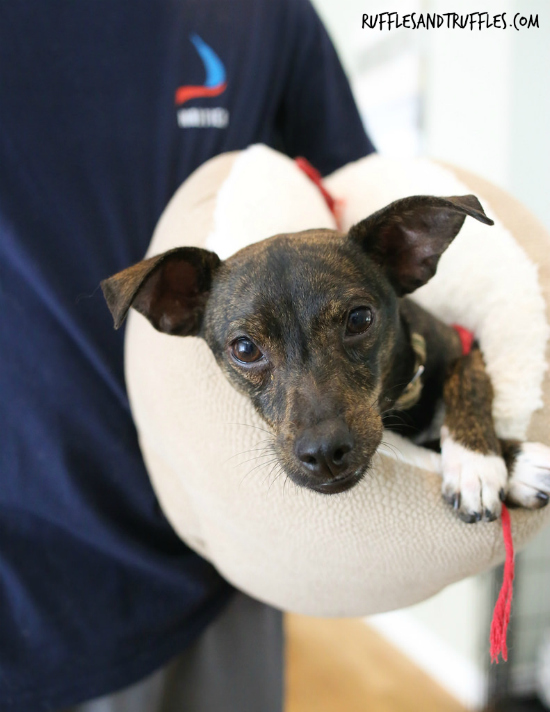 It does appear that Sherman is getting more comfortable in his new home; bits of his puppy personality are popping up nowadays. He apparently has taken a liking to my kitchen dish towels. Thankfully, he doesn’t want to rip them apart. However, every once in a while when Justin and I are sitting on the couch at night, we’ll see him dash out of the kitchen with a dish towel dragging behind him. He immediately puts it in his bed and lays on it. Little punk! We’re going to have to break him of that habit pretty quickly. But for now, I’m thankful he isn’t destroying things. I can handle a misplaced dish towel or two! 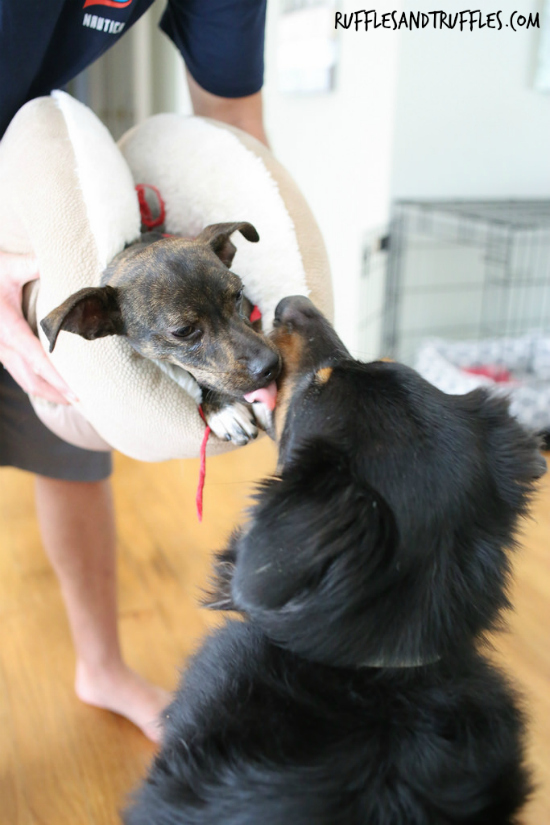 Next step: getting into a bit of training. Sherman doesn’t know how to sit, shake, stay…or do any trick whatsoever. It’s time for a bit of doggy manners, I think! He does understand the word “no” (I’ve been a bit wary when it comes to discipline at first…not knowing what his background is). He’s already learned that he is not allowed to enter rooms with carpet (Lucia has been taught the same), so I am taking that as a sign that he’ll pick things up once I get started. It has been a while since I’ve trained a dog with the basics, so we’ll see how it goes!

And I mean…how can you not melt when you see a face like this? I can’t handle it.