I thought it was time for yet another Furbaby Friday. I can’t help myself, you know? So…when I was at Home Goods a few weeks ago, I spotted a few packages of antler chews for the dogs. I brought home two of them for Lucia and Sherman; a small one for Sherman and a larger one for Lucia. I should have known it wouldn’t work out the way I intended. Of course, as soon as I presented the dogs with their proper sized antlers, they switched them. Lucia was all about the smaller antler, and proceeded to gnaw it to smithereens in less than an hour. Meanwhile, Sherman proudly dragged the large antler chew around behind him and got to work. Ridiculous little guy…claiming the big dog’s treat. 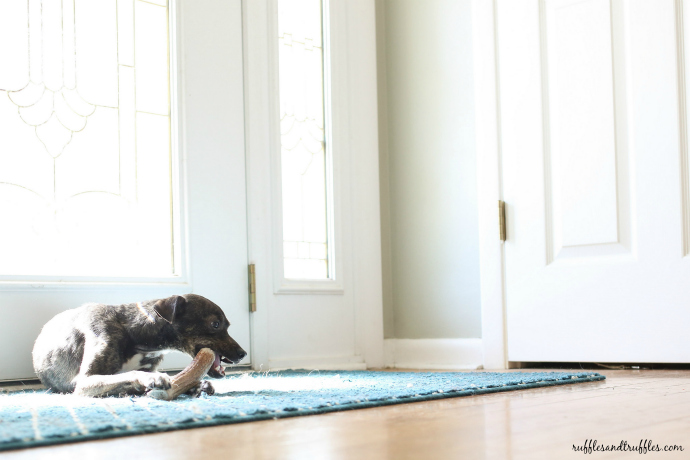 I don’t think Lucia was really thinking through for the long term. Once the smaller antler chew was devoured, she was left with nothing to munch on. She was relegated to watching her little brother as he happily chewed on the too-big-for-him antler. Giving me a skeptical look the entire time, of course. I mean, look at that eyebrow. I will say this about Lucia: she has an extremely patient spirit about her. I could see how jealous she was about Sherman’s chew, but she never made any moves to take it away from him. She just watched him longingly. The amount of torment she has to endure thanks to her new little brother is pretty amazing; he jumps on her, nips at her legs and ears, sleeps on her bed, and more. But she has never once been rough with him. They are certainly an odd couple. 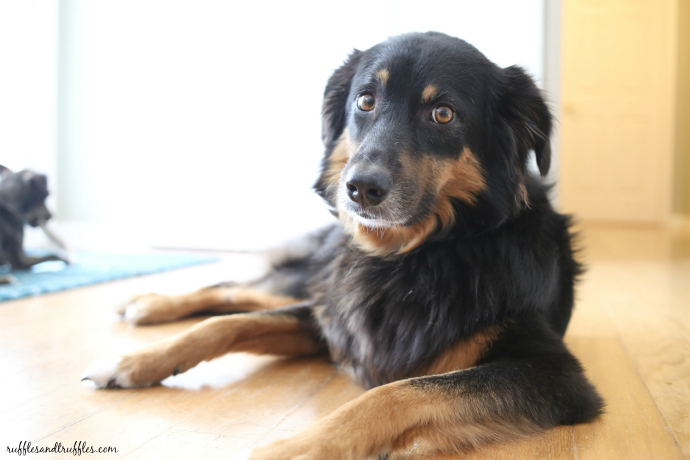 The story of the antler chews does have a happy ending though. I was lucky enough to spot another larger antler chew on a return trip to Home Goods, so I picked up a new one for my forlorn furbaby. They are both the happy recipients of a large antler chew…even though Sherman looks quite comical as he attempts to chew his.