So, if you follow me on Twitter, you might have noticed that I wasn’t having the best of weeks last week. On Tuesday, dinner didn’t exactly agree with me…

Then, to add insult to injury…on Thursday night I had an accident.

It was after 10pm and Justin and I were getting ready to go to bed. Justin was in the bathroom brushing his teeth and I thought it would be humorous to dance around like an idiot to make him laugh. I know: I’m weird. So, Justin gave me the skeptical eyebrow raise, yet I continued to ham it up. I sashayed out of the bathroom and into the hallway, where I proceeded to start a bit of the Running Man.

Then: sharp pain in my right foot. I stopped in my tracks and lifted my foot up. Oh…my….gosh. Blood began pouring out of my big toe. Not a small pinprick with a drop of blood, we’re talking an actual stream of blood. I let out a moan and teetered around on one leg. Justin rushed out of the bathroom asking me what happened.

I managed to hop into the bathroom, leaving a trail of blood on the carpet behind me (and a hand print on the wall when I tried to steady myself on the way). Justin told me later that his immediate first thought was that I was going to go down. I have a habit of passing out/fainting; he was surprised I didn’t go in that direction. Anyway, Justin handed me a wad of toilet paper, and I started to apply pressure on the wound. There had been so much blood at first that I couldn’t even see how big the cut was or where it was located on my toe. Turns out, it was about a 1/2 inch long, right in the center of my big toe. Argh.

And then, don’t ask me why, but I asked Justin to bring me my iPhone. So I could take pictures. What??? Honestly, I must have been lightheaded…but I wanted to document how much blood actually came out of my freaking toe. P.S. – there were two more wads of toilet paper used to stop the bleeding after this picture was taken. Blech. 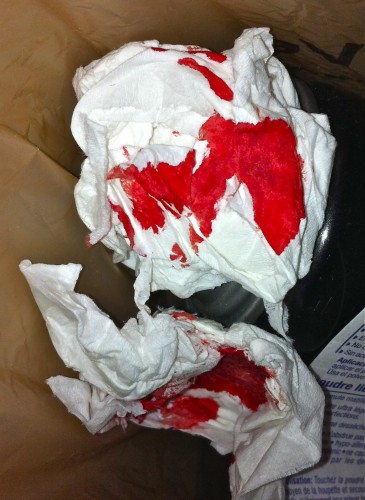 I did also comment on how pretty the color of my blood was. Yep. Me = lightheaded. Anyway, after the bleeding stopped, we began our hunt for what actually cut me. We scooted around on our hands and knees, running our hands across the carpet. I spotted something sticking out of the carpet, glinting at me. I picked it up: it was a piece of glass. Enter: confusion. I had not broken any glass in over a month. I broke a champagne glass in the sink around our anniversary (end of May), but it was a clean break (just into 2 pieces), and it was contained in the basin. So: where the HECK had this glass come from? And, how in the world did my vacuum fail to pick it up in the MANY times I’ve gone over that spot in the past (I vacuum at least once a week)? Mystery.

It wasn’t until the following day that we figured it out. I was putting away a bud vase I had used right around our anniversary as well, when I noticed a small chip in it exactly the same size and shape as the shard we found in the carpet.

Now, I have absolutely no idea how or when the piece broke off, but I guess it happened. Curse you, bud vase!

That’s it: I’m putting away the dancing shoes. That’s what I get for breaking out the dorky moves, I guess.

Have you ever had a humorous household accident? What was it?