On Wednesday night, I may or may not have been a little bit mean. I think I was justified, but I guess I’ll let you be the judge.

The time was roughly 9pm. We had just finished eating dinner out with my parents, and I was on my way home (since Justin had met us directly after work, we had separate cars). To get to our apartment, I typically take a few miles of back roads (through neighborhoods…not through the middle of nowhere) as opposed to the highway. As soon as I turned onto the back roads, another car began following behind me. At first, I paid no attention, but then the headlights of the car began to glare annoyingly in my rear view mirror. Upon glancing in the mirror, it was clear to me that this person was tailgating.

The speed limit on these roads is 30mph. I was going 32mph; I don’t like to push it on dark roads that happen to have twists and turns. The person behind me was clearly wanting me to go faster, and was simultaneously unable to pass me because of double yellow lines on the two lane road.

If there is one thing that enrages me while driving, it is people who tailgate. 1- it is dangerous. 2- it is rude. 3- it makes me insanely nervous. I was driving at a reasonable speed; why did this person feel the need to ride the back bumper of my car? Come on dude: how much of a hurry could you possibly be in that you have to speed through neighborhoods? People could be outside walking their dogs.

It was at that point that I decided to be vindictive…ever so slightly. The speed limit was 30; that meant I could drive under it too. So, I slowed down from 32mph to 28mph: just a little bit slower***. I don’t know if the driver behind me had even noticed the difference because it was pretty slight, but I sat in my car feeling triumphant. Take that, tailgater!

So yes, I might have been a little bit mean, but I really don’t care. Seriously people: do not tailgate. It’s annoying.

And just for making it through my little story, here’s a little puppy cuteness, courtesy of Lucia! Happy Friday everyone! 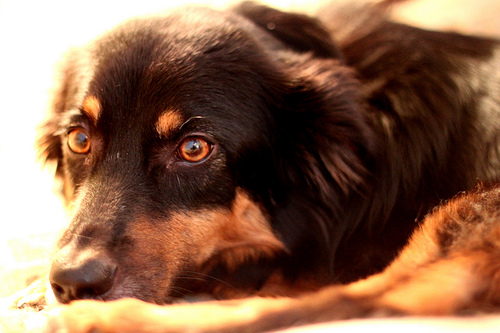 ***I do want to note that this person wasn’t being aggressive, just annoying/inconsiderate. When she drove by me, I am quite sure that it was a teenage girl in the driver’s seat. Why does that not surprise me? Anyway, if I had felt like this person would have been aggressive towards me, I wouldn’t have done this. Also: Justin was driving right in front of me at the time.