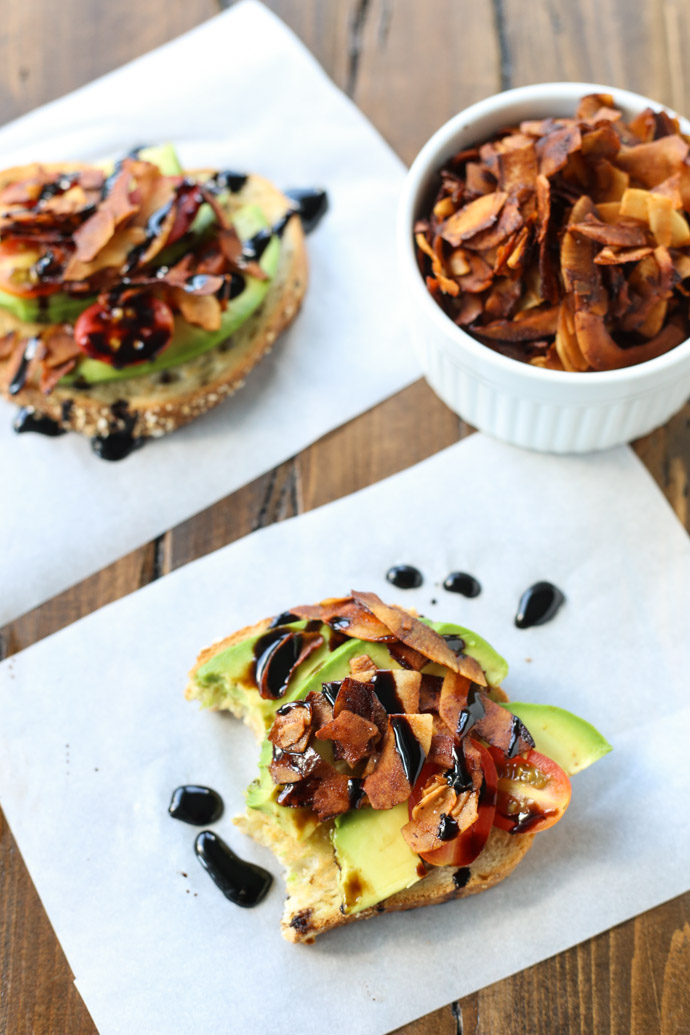 Let’s talk about bacon. It’s beloved by many, that is for certain. In the past just the mere mention of bacon on a menu item would most likely entice me to order it. I could eat bacon with breakfast, lunch, or dinner. For Sunday Supper this week, we’re sharing oh so many recipes that feature bacon! Now…I know what you’re thinking: “ummmm Katie….you’re a vegetarian. What in the world would you be doing with bacon?” I realize it seems absurd. But my friends, there is a magical little thing in this world known as coconut bacon, and I am going to show (and tell) you alllllll about it today! 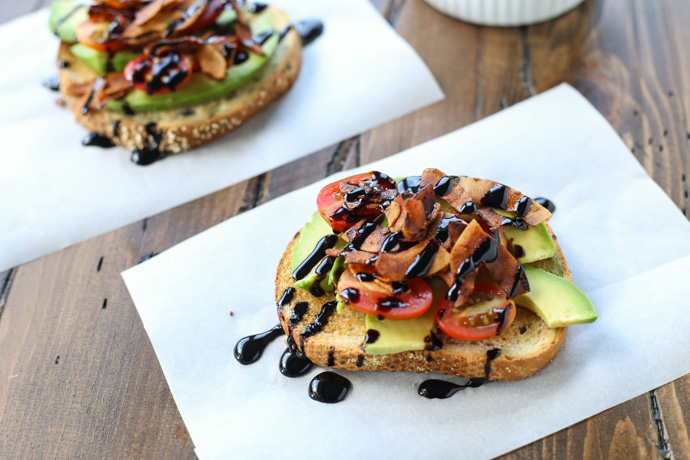 I’ve been a vegetarian for years now. At first, I would have told you the meat I missed most was bacon. There was just something about it that I had a feeling I would be sad to leave behind. Needless to say, I got over it, but being able to create something meatless that brings me back to the flavor of bacon was something that I absolutely could not pass up. 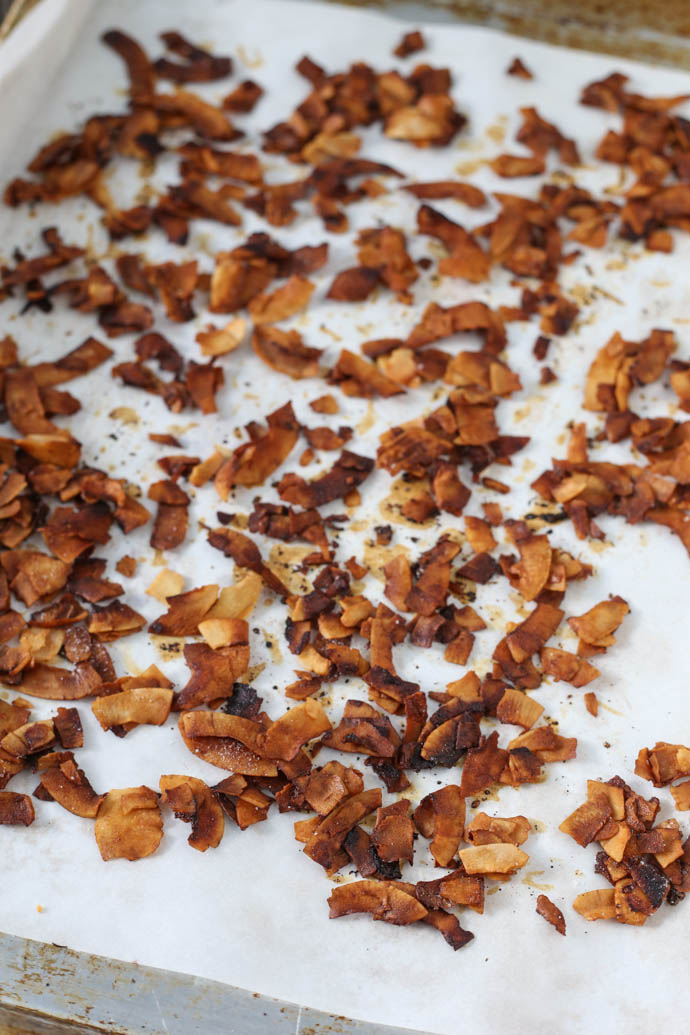 I had been hearing about coconut bacon for quite some time now, and I knew I just needed to jump in and create some in my kitchen to see if it lived up to the hype. I mean, the curiosity alone was enough to get me to put all of the ingredients together. It only requires a few ingredients, a couple of minutes in the oven, and bam! Meatless bacon…aka coconut bacon. It’s a thing.

Although it isn’t technically bacon, this coconut bacon brings out similar flavors in comparison to the “regular” version. You get some salt from the tamari, sweet from the maple syrup, and hickory flavor from the liquid smoke. I was always the person who wanted SUPER crispy bacon, so these thin shavings of coconut give you that satisfying crunch. When you pair everything together on this toast, it is pretty much breakfast, lunch, snack…WHENEVER perfection. 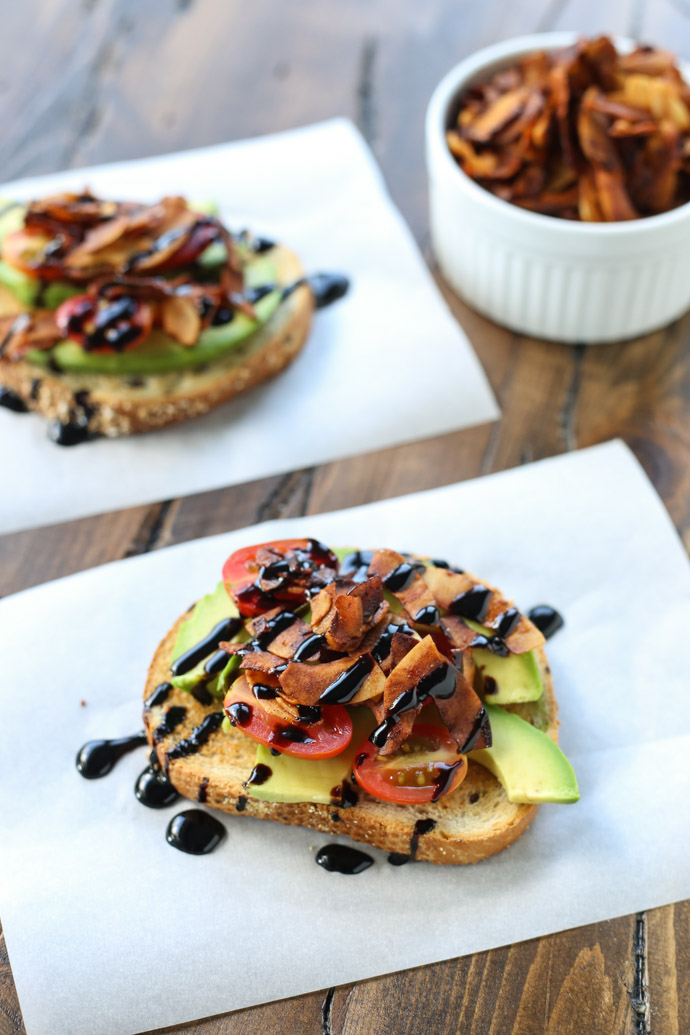 I mean, can you really go wrong with anything that involves avocado? Nope. Creamy avocado, sweet grape tomatoes, salty and crispy coconut bacon (oh, and don’t forget the drizzle of balsamic glaze either) – it’s a flavor and texture home run in my book. You could even add an egg on top for brunch perfection. As I’m writing this, I’m seriously ready to run back to the kitchen and make another one with a fried or poached egg. Oh boy. 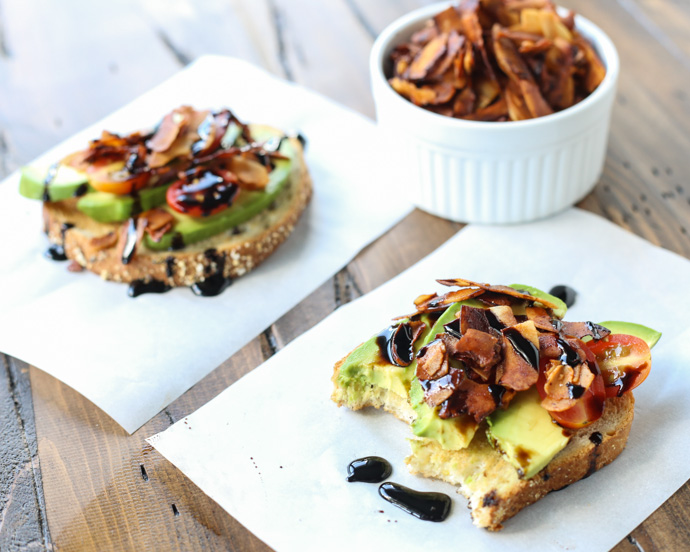 If you don’t want to use all of your coconut bacon at once, the good thing is that you can store it in the refrigerator for a few days in a sealed container OR freeze it for even longer! You’ll have the ability to make coconut bacon creations on demand. Score. This particular recipe will make enough for about 6 pieces of avocado toast, so you can always double or triple the recipe to make extra for later!

So…I’m curious – would you be willing to try out the vegetarian version of bacon? Or, if you have experienced coconut bacon in the past, what did you think? 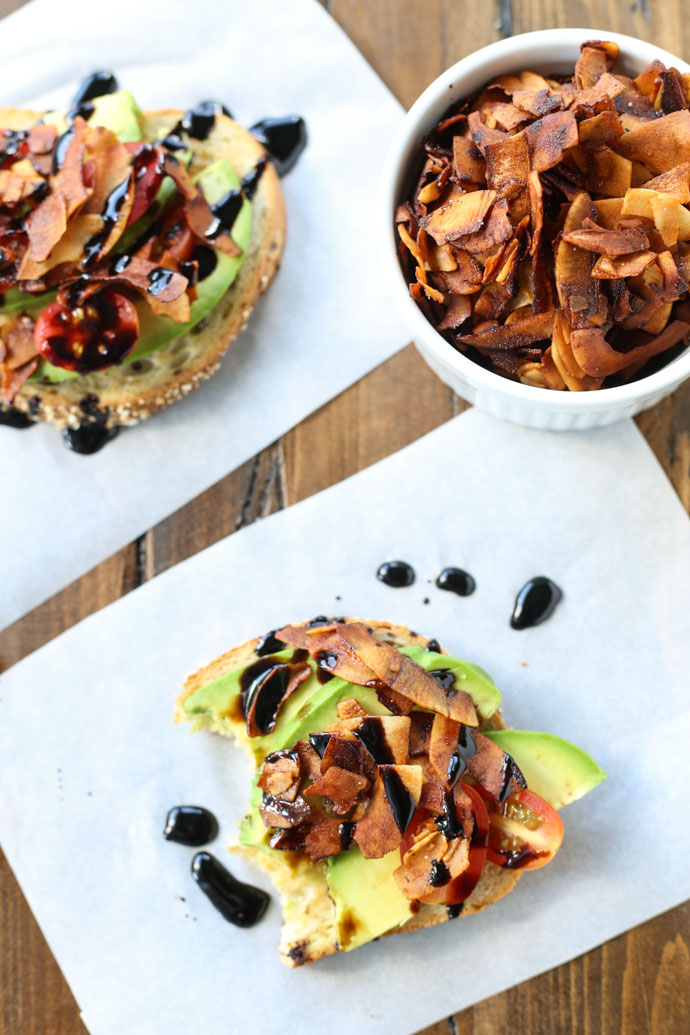 Of course, don’t forget about all of the amazing bacon recipes being shared today for Sunday Supper!

Bacon as a Side Dish

Join the #SundaySupper conversation on twitter on Sunday! We tweet throughout the day and share recipes from all over the world. Our weekly chat starts at 7:00 pm ET. Follow the #SundaySupper hashtag and remember to include it in your tweets to join in the chat. To get more great Sunday Supper Recipes, visit our website or check out our Pinterest board.