I am not sure how I got into the habit of this, but it happens without fail. I MUST have something sweet to eat at night. I don’t like eating my dessert directly after dinner; I need time to let everything settle (thankfully this saves me from ordering desserts at a restaurant most times, haha!). I usually wait about an hour and a half and then dig in to a small scoop of frozen yogurt or nibble on a few pieces of dark chocolate an hour or two before hitting the hay.

Sometimes I do like to switch up my routine, though. One of my other go-to desserts is a pudding mousse. It’s so simple to create: you whisk one cup of milk with one packet of instant pudding for about two minutes until the mixture becomes thick and smooth. Then, you fold in one cup of whipped topping (like CoolWhip), pour the mixture into bowls, and pop it in the refrigerator for at least five minutes to allow it to set. Then, you add a dollop of whipped topping, a spoon, and you’re good to go!

My typical routine for making this semi-homemade mousse is to use the skim milk we have on hand in our refrigerator. However, I was recently introduced to Promised Land Dairy and their array of milk flavor options. Their milk comes from Jersey cows that are not given any hormones or antibiotics. Their product line ranges from while milks (whole, 2%, skim, half and half, and heavy whipping cream), to Midnight Chocolate, to Very Berry Strawberry, Cookies and Cream, Mocha (um: yum?), and White Chocolate. There’s even a selection of holiday flavors, like Chocolate Egg Nog, Cinnamon Vanilla Milk, and more. 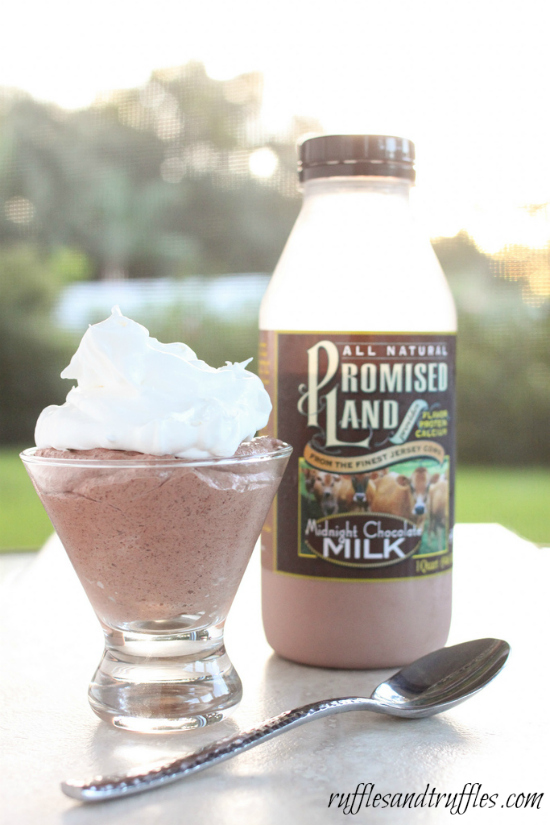 I decided to use their Midnight Chocolate Milk with a chocolate fudge pudding to make my mousse this week, and holy moly. The milk by itself is decadent and flavorful, and when it is added to the mousse mixture, it creates an oh so luscious taste treat. I am tempted to whip some of it up another time and scoop it into a pie crust to make a quick chocolate mousse pie for the holidays. I’m also pondering the different flavor combinations I could use. How about Cinnamon Vanilla Milk paired with a white chocolate pudding? I just might have to start experimenting….

Have you sampled milk from Promised Land Dairy yet? Which flavor would you most like to try?

***Disclosure: I was provided with samples of Promised Land Dairy to try, but all opinions are my own.***