Sometimes, great things come in small packages. When it comes to sweets, I usually like mine to be on the more petite side (I can eat more of them….right???). 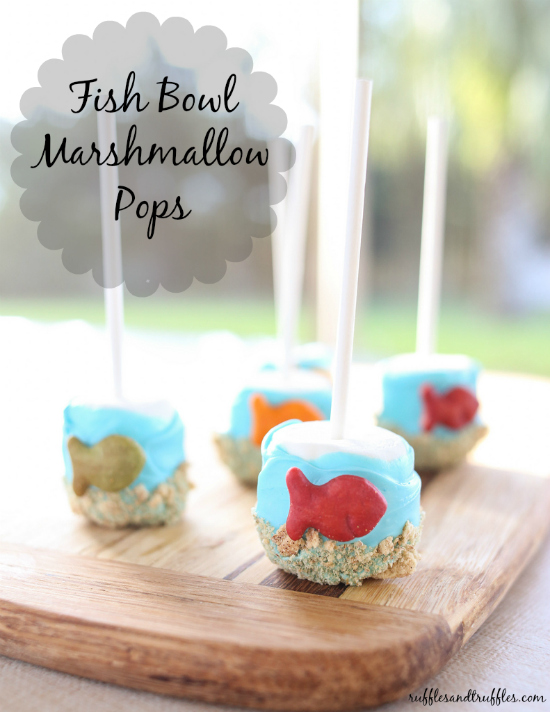 I’ve previously delved into the realm of marshmallow/s’mores pops. They were a great treat to create with my Sweet Treats class last year (made up of Pre-K and Kindergarten children). Then I decided to up my game with my middle schoolers when I stumbled upon this inspirational set of images. The fish bowl/sea scape cake served as a starting point, but I wanted to take them down a notch to a smaller scale. Fish bowl marshmallow pops, perhaps? It took my original, simpler concept up a notch as well! 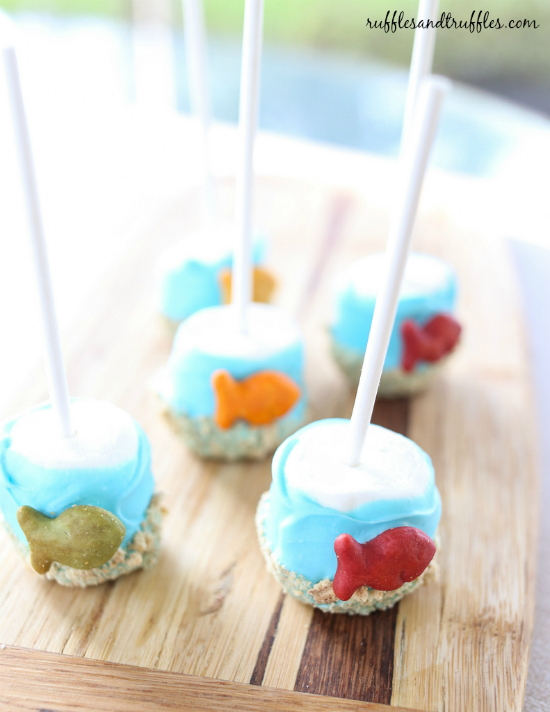 These pops are such a great snack for a party, but are also wonderful as a treat in general. The combination of white chocolate, marshmallow, and graham crackers is wonderful. One pop is just enough sweetness to satisfy a craving. They were also the perfect size to share with our Pre-K students at school (my middle school yearbook staff created a batch to give to them as part of a project). If you aren’t serving them right away, I would suggest storing them in a covered container in the refrigerator to keep them fresh. Kids and adults alike should be big fans of the treat!

One more note: I used the multi color cheese Goldfish crackers on this batch of pops, but you could really utilize any of the flavors. The cheese flavors might seem like an odd combination (but are great colors)…Goldfish has lines of graham cracker fish that would be great for these pops as well. We used some funfetti cupcake flavored grahams on a batch and they went over VERY well! They could also serve as a shortcut for the graham cracker crumbs if you don’t want to purchase a package of graham crackers just for this recipe – a few crushed graham cracker flavored Goldfish would do the trick as well!

Are you a fan of the marshmallow/chocolate/graham cracker combination? S’mores, anyone??? 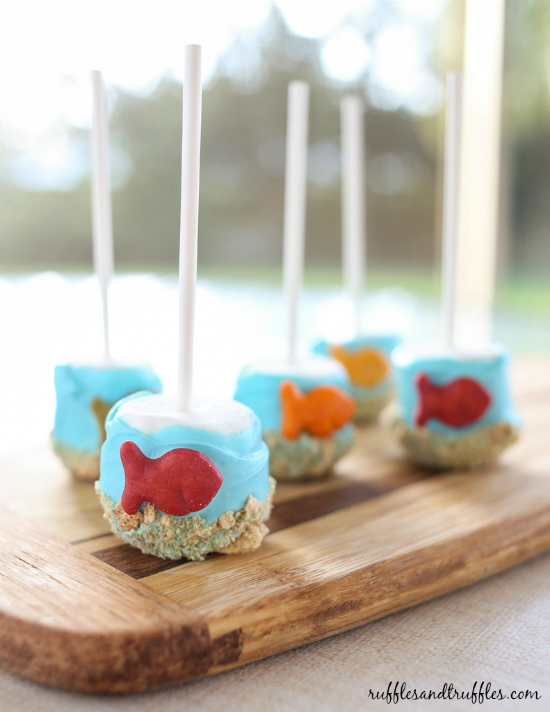 Blue food coloring (I use the neon blue color)

1. Spread a sheet of wax paper out on your working surface. Insert a lollipop stick into one of the flat sides of each marshmallow, then set the pop out on the wax paper with the stick facing upwards.

2. Melt the almond bark/white chocolate according to package instructions. When fully melted, add approximately 2-3 drops of blue food coloring and stir, until the chocolate has reached desired hue. Meanwhile, crush 1-2 graham crackers into crumbs and place in a shallow dish. Set aside.

4. Repeat this process until you have completed all of the marshmallow pops. Place the sheet of finished pops in the refrigerator to set or to keep fresh until serving. Enjoy!