Well, here goes nothing. I know a lot of mamas out there who write letters to their children during the months of their pregnancy, and I always thought it was something special. One of the things I’ve realized about adoption is that there just aren’t as many of the same experiences for a soon-to-be parent as there are for those who are pregnant. No matter though. As your father and I wait for you, I’ve decided to write monthly letters. Perhaps they will span a length of nine months. Maye more. Maybe less. I have no way of knowing. Maybe you’ll read them one day…maybe these will just be for me to reflect back on in the future. Who is to say?

It seemed fitting to begin these letters in August 2017, as this was the first month we were officially a waiting family! We were home study approved on July 31, 2017. It seems like our entire year was filled with the paperwork process, and now we have finally reached the end…to what will probably be the most difficult part for me and your father. We have officially entered into the unknown, which is slightly terrifying but also exciting.

Through the months of home studies and paperwork, we also started to get ready for you to come home with us. One thing you’ll learn about your parents is that we love to take on a DIY project, so your nursery was one of the first items we started to tackle. Our spare bedroom, which will be your nursery, is a large room that we have never used before (except for storage). I always hesitated on furnishing and decorating it because I knew eventually it would become your nursery. I wanted to wait to spend the time and money on everything when you were more of a reality! 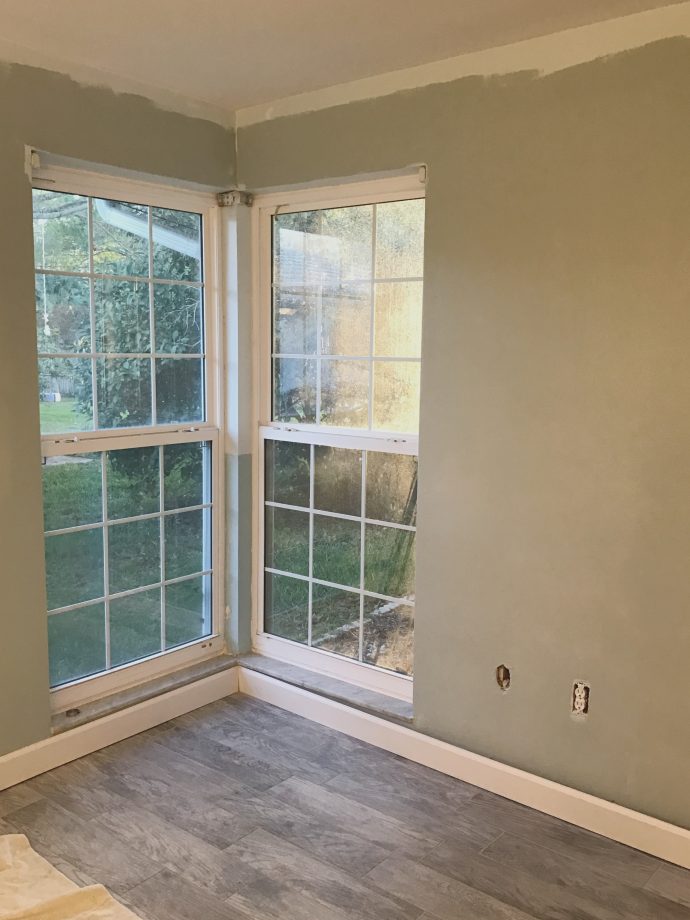 The floor of the room was damaged hardwood floor from the previous owners, and it was covered in carpet on top. Your father spent hours removing the carpet, and then tore each and every board up from the ground. Every night when he got home from work, he would spend an hour or two back in your room, working on preparing the floor. We picked out some brand new tile and he spent even more hours carefully laying each tile down. There might have been a few mistakes and learning moments along the way, but oh boy – does that floor look amazing now! After the floor was done, we spent some more hours painting from top to bottom. I put a fresh coat of white paint on your ceiling (and got a terribly stiff neck in the process – worth it!), and then ended up picking the same paint color we’ve used in other parts of the house for the walls. That’s another thing to learn about me – when I find something I like, I stick to it. Right now, your nursery walls are a soft blue/green color called Rainwashed. It’s the perfect neutral, because as of now I am planning a gender neutral nursery for you. Are you going to be a boy or a girl? No clue. We don’t have a preference, truly. 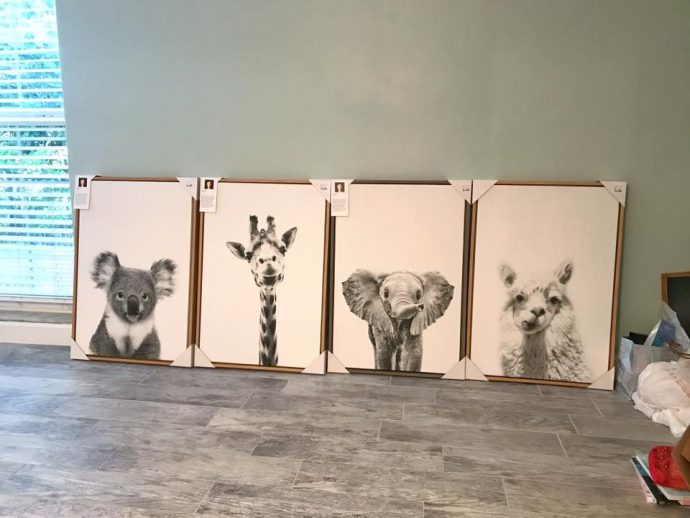 Right after we painted the nursery, your father and I were perusing the aisles of Home Goods (get ready baby – we’ll be making many trips there over the years) when we spotted a set of prints that spoke to me. Because we are going gender neutral with the room, I had been thinking about some animal prints for the walls above your crib. Bam. There they were – an adorable set of black and white animal prints that would look perfect. Except – one of them was in a gray frame and the others were in brown frames. I bought them anyway and brought them home, thinking your father and I could think of a way to paint the frames, or even remove them altogether. Nope. We tried, but to no avail. On a whim, I put a picture of the prints up on Facebook and Instagram, asking if anyone else had spotted the prints (or any others in the collection – there were many!) in frames that would all match. The search was ON. I know it might sound silly, but it made your mom’s heart happy to receive an overload of messages from people who were on the lookout for those prints for you. The entire Internet was involved, it seemed! I had old friends who I hadn’t connected with in years sending me pictures when they were at their local Home Goods, showing me their findings and asking if I wanted them to ship the prints to me. In the end, I ended up returning the prints and decided it was a great inspiration…but I’m going to have to figure out a different way to decorate your walls. Darn it! It was a really good start though!

So…will your father and I be first round draft picks when it comes to being matched? Time will only tell. For my sake, I hope there is a little bit of time for me to prepare…not that we aren’t ready! But I have a feeling I’ll be waiting just a little bit longer at this point. However, if you decide to surprise us a little early I wouldn’t be mad. Just saying…