Wow – it is kind of hard to believe that such a game changing day in my life occurred three years ago. On one hand, the years have flown by; on the other hand, it seems like such a significant amount of time!

Three years ago, I went to the pet beach with Theo in the hopes that I’d run into a guy I’d met two weeks prior. He said he’d be returning, and I was hoping to meet up with him since our conversation had been pretty wonderful the first time (but he had wussed out and never asked for my phone number that day). 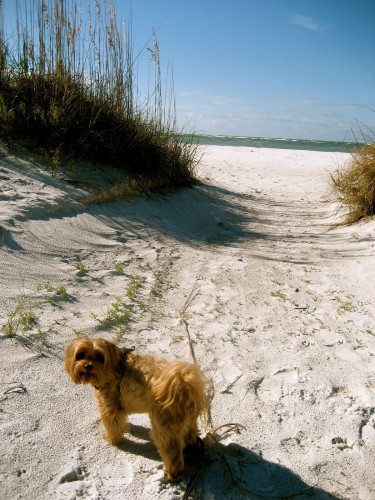 Luck was on my side that day, because he was there. And we talked again. After some hinting/suggesting, he asked me out to dinner that evening.

Ah, little did I know that I would be dining with my future husband that night. We met at Casa Ludovico and had a lovely dinner. We talked for hours; the staff at the restaurant was probably angry with how long we were at the table.

His outfit was a little dorky; I hadn’t started picking out his clothes yet…

I probably talked WAY too much. When I’m excited or nervous, I tend to babble incessantly. I really try to control this, but I always seem to fail miserably at it. Thankfully, he still liked me despite this.

After that evening, I never really looked back. Almost exactly 8 months later, we were engaged. And now: we’re married.

All because of a random meeting on the beach one day. And that first date.

Thanks for getting up the courage to ask me out, honey. I love you.

What did you do on your first date with your significant other (if you have one)? Was it a memorable event?